‘Roxy’ presents an interesting case of negative reinforcement. She was a bright and active German Shepherd cross but when a thunderstorm arrived, she was petrified and resembled a hairy blancmange more than a dog. It took ‘Roxy’ no time at all to realize that running into the house and hiding under the table was the thing to do. There, she gained comfort from her owner’s company and she reduced her exposure to the noise, wind and lightning of the pounding storm thundering outside. The result of her behaviour was far more pleasurable than braving the thunder and lightning.

Jessie the Terrier – the teeth-gnashing terror – Positive Reinforcement in Action

Let’s look at a real example from my case histories. Jessie the Terrier was a teeth-gnashing terror. She was aggressive when anyone tried to grasp her collar. Her aggression was immediate and intense. However, she tolerated handling around her face and head well and, if they avoided her collar, her owners could usually handle her easily. Could Jessie’s owners use positive and negative reinforcement to control this problem?

Positive reinforcement for Jessie’s behaviour involved stoking her on the nose and muzzle. If no aggression occurred, then her owners gave her a food reward. She tolerated this stroking well and it was a good starting point.

After stoking her on the muzzle a few times, Jessie started to look forward to the food reward. Now we had her on the go! The owners progressed by stroking her on the head and later by quickly hooking her collar with a finger. They released the collar after a second or two. Through this progression, if Jessie showed no snapping, they rewarded her.

They progressed by attempting to hook-the-collar for longer and longer periods. Jessie enjoyed the food rewards and the whole process was quite smooth. 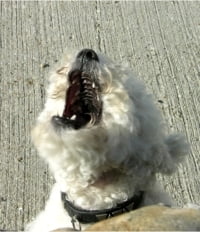 Negative Reinforcement, the removal of an unpleasant stimulus if a desired behaviour occurs, could be attempted for ‘Jessie’.

Here it could involve the use of a loud aerosol personal alarm, an electric ultrasonic ‘whistle’ or even the owners continually growling at her. The alarm, whistle or growls are sounded continuously while movement towards ‘Jessie’s’ collar is attempted. When the collar is touched or ‘hooked’ with a finger and no aggression occurs, the sound was stopped. ‘Jessie’ would usually not find the sound pleasant, but she would, by comparison, enjoy the cessation of the sound when her collar is touched.

In reality, this technique was not reliable and Jessie’s owners were much happier with the positive reinforcement technique. 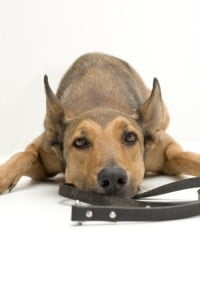 Punishment is the opposite to reinforcement. When you punish a behaviour, it becomes weaker and is less likely to occur again. The rolled newspaper is a primitive form of positive punishment.

Looking at your driving behaviour again, if you are traveling at 120 kph again and a police car approaches from behind with sirens screaming, you know what happens next.

You pull over and the burly policemen slowly and deliberately writes you a ticket, while his gaudy police car is behind with its lights flashing. You can feel the mocking smirks of the other drivers as they pass by. You correctly receive a tongue lashing from the police officer, squirm as you pay the fine and worry that you have lost a few points from your license.

The police officer is thus positively punishing your ‘driving over the speed limit’ behaviour.

Could punishment be used for Jessie? Yes, but you have to be very careful using punishment for aggression. We’ll put Jessie aside for a moment and look at the case of ‘Fur Ball’ for a clever and gentle use of positive punishment.

‘Fur Ball’ and the Veggie Patch

‘Fur Ball’ was a perplexing Persian. She insisted on doing her whoopsies in her owner’s vegetable patch. The soft, tilled soil made an easy and convenient toilet, but no one in family really wanted to eat the vegetables afterwards. No wonder!

Something unexpected happened next time ‘Fur Ball’ casually sauntered to the veggie patch. She was saturated by her owner’s new toy – a Scarecrow! This is a sprinkler activated by a motion-sensor similar to those sensors on security flood lights. It gives a three-second blast of water and then resets itself for the next assault. ‘Fur Ball’ soon decided that the veggie patch had lost its charm. Her ‘approaching the veggie patch’ behaviour had been punished and was thereby weakened. This is positive punishment – where an unpleasant experience is an immediate consequence of an animal’s behaviour.

Negative Punishment is a gentler form of punishment that you could use. Negative punishment is where you remove something pleasant or desirable to weaken an unwanted behaviour. For children the ‘You will not watch TV for the rest of the week for fighting with your brother!!’ routine is a form of negative punishment.

Negative Punishment could be used to weaken Jessie’s aggression. When her owners handled her collar and she responded aggressively Jessie was immediately put outside the house or confined in a room away from the family company and activity. Jessie did not like being removed from the family. It was removing something pleasurable and was therefore negative punishment.

If you are trying a routine like this, don’t ‘time out’ your dog in a gruff, surly manner. Just coolly and calmly walk your dog to the time out room and close the door.

For ‘Jessie’, this was a useful and gentle technique.

Could positive punishment, the administration of an unpleasant stimulus in an attempt to reduce or weaken her behaviour, be attempted for Jessie?

To use this technique, Jessie’s owners would grasp her collar tightly and, when aggression occurs, punish her by spraying her face with a water pistol and shouting ‘NO, BAD DOG!’

This was not a very effective technique for ‘Jessie’.

The stimulation of the punishment pushed her too far and an aggressive cascade resulted. She got worse, not better, which is often the case when you use positive punishment for aggression.

In reality, a combination of negative punishment and positive reinforcement solved ‘Jessie’s’ aggression. I advised her owners to place a food reward just out of ‘Jessie’s’ reach, and then to command her in a firm but kind voice, ‘Leave’. They were advised to slowly stroke ‘Jessie’ on her nose and head for about five seconds. If she was calm, she was praised and given the food reward.

After several repetitions of this simple routine over a day or two, ‘Jessie’ started to look forward to her food reward. They repeated the process, however, her owners now briefly hooked her collar with a finger and then released it.

At this stage they induced some aggression. I advised them to immediately stop handling her collar, to remove the food reward and to place ‘Jessie’ in the bathroom for about two minutes. (What process is being used here?)

Sensitive New Age Pet Owners (SNAPO’s for short) know all about such behavior conditioning techniques. They know that positive punishment – where a nasty stimulus is used to change a behaviour – is often very harsh and is the least desirable way of causing behaviour change. They also now that positive reinforcement and negative punishment are usually soft and progressive techniques and, generally, are quite effective.

So SNAPO’s! Burn the rolled newspaper in protest. The time for humane animal training has arrived. If your dog or cat does something wrong, think before you spank!