Aggression between dogs is often made much worse by the owners handling the problem incorrectly thus causing aggression between dogs to be severe and prolonged than it otherwise might be.
For instance, if your dogs are aggressive only when you are present, but are quite social towards each other when left alone, then you can safely assume that you are part of the problem! This is usually because you have been favouring and protecting one dog in its altercations with the other. The subordinate dog feels ‘protected’ when you are present and will be more likely to offer a challenge to the other dog.

It’s wrong to look at this as a dominance issue as the dominance principle does not apply well to pet dogs. Dominance applies to free-ranging animals that don’t have the restrictions of small gardens and domesticity that are part of a modern pet dog’s lifestyle 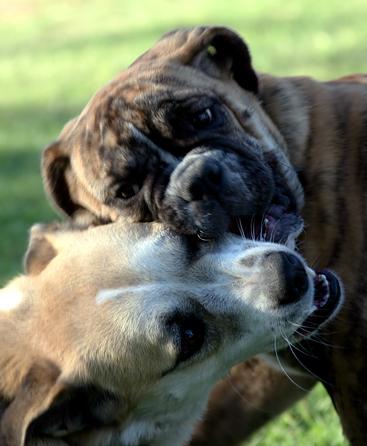 Some dogs are also predatory. Rather than fighting to elevate its rank, sometimes a dog will prey or hunt another dog in much the same way that it will hunt a non-dog animal such as a mouse, rat or chicken. If your dog is silent when it attacks, not giving a warning growl, it could be predatory aggression. Predators don’t warn when they are about to attack.

So, why was there, apparently, no obvious reason for Baby attacking Queeny? Mostly, because of a sudden change that occurred with Queeny one day.

Queeny suffered a serious car accident and spent a day or two at a veterinary surgery. When she was taken home, Queeny smelt different because of the residual odors from her stay at the surgery. She behaved in a different way because of the after-effects of the anesthetic, and was treated differently by her owners because she required intensive nursing. There were too many changes occurring too quickly for Baby to deal with.

Baby was the boss dog but Baby saw that her owners where now favoring Queeny, the subordinate dog, due to the necessary nursing. What started as occasional nips when the owners were carrying Queeny to the garden for exercise, soon escalated to venomous, predatory attacks. (Queeny was also known to prey on small animals such as chickens and possums). More informaton

Why did it get worse? Mostly, because the dogs’ owners were understandably punishing Baby for her aggression to the disabled Queeny. From Baby’s point of view, this was a major insult and required fearsome attempts on Baby’s behalf to re-create the proper hierarchy – and each time she tried to do this, the owners suppressed her further.

But Queeny was not an innocent petal either! She soon learnt that a covert glare at Baby, when the owners weren’t looking, was enough to create a return threat from Baby which the owners noticed and would then punish. By stealth, Queeny was using her owners to elevate her own position in the rank

What a complicated problem

The solutions for this dilemma involved separating the dogs to prevent further threats, teases and brawls between the dogs and resultant punishments from the owners – all of which were keeping the pot boiling.

Then we skilled each dog, separately, to respond to a set series of new commands using a technique called the Circle of Commands. To summaries this technique, the dogs were rewarded consistently for responding to the simple sequence of LEAVE, COME and SIT.

After this was achieved, both dogs were brought together cautiously, on lead, and the same sequence of commands was used to prevent aggression and to reward the alternative good behaviors. This was done with the dogs at a distance first and then they were brought closer together as success occurred.

Finally, the owners were taught how to recognize the covert challenges from Queeny and how to create a proper ranking between the two dogs by favoring Baby and softly suppressing Queeny.

If your dogs are showing similar behaviors, please be careful. There is always a risk when dogs fight. Injuries don’t only occur to the dogs but also to the owners during their attempts to separate the fearsome fighters.

If you need personal assistance for your dog’s aggression, get started by completing this Behavior Assessment Form.