If you are living with a pair of brawling cats I’m sure you are living a nightmare. It’s catastrophic! But there are solutions to the worrisome behaviour. 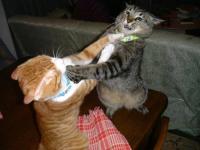 Why are cats aggressive to each other? Often its because you have brought a new kitten into the household and the status quo has been unsettled. Sometimes it occurs when a young cat matures and feels the need to declare its territory inside the house.

A behaviour known as transferred aggression often occurs too. A house cat can be angered by sensing another invading cat travelling through its garden. The resident cat becomes over-aroused and will take out its anger on its house mate – or even its owners!

Kittens can also cause problems for themselves. Some are too active for their own good. It is common for a super-active playful kitten to push a serene, established house-cat too far. The peaceful, older puss-cat may not want to play all day long and most of the night too. The kitten’s playful prowling and challenging may greatly offend the resident cat and can make it very nervous and anxious.

Aggression between cats can sometimes start instantaneously. However, having been ‘released’, can then take a long time to resolve. Sometimes it doesn’t resolve at all.

Three levels of assimilation with cats.

In level 1, the feuding felines shake paws and become bosom buddies again, playing and sleeping together in puss-cat harmony for life.

The second is that the pair agree to disagree and share the house without sharing affection. They sleep in separate areas and lead separate but parallel lifestyles. There may be an occasional hiss and spit, but mostly things are tolerable. Indeed, one cat couldn’t give a hoot if the other fell of the face of the earth! This is the most common level of assimilation with cats.

The third scenario is puss-cat purgatory. The cats hate each other and cannot be in the same room or house or even the garden together. They will aggressively fight and brawl and injuries are common. The best way to manage such cats, at least initially, is to keep them separate from each other.

Aggression between cats in a household can be dangerous. Injuries can occur, including cat fight abscesses, claw and bite wounds, and the stress can result in spraying behaviour too.

Contents of next page