Getting good behavior from dogs page 2

Talking to your dog in language it understands is the first step. So many dog owners berate their dogs with a cascade of ineffective words.

The words are background music and mean nothing to your dog.

The ‘Talk Like a Dog’ Principle refers to the use of a CLEAR AND KIND voice to get a dog to do something. This is a firm but pleasant voice.

Then you need to reward its response. To do that, you should use the GOOD DOG voice which is much higher and very joyful. For some dogs, the GOOD DOG voice is better done as a whisper which in many cases has a calming effect on an over-active dog.

If you need to punish your dog, use the BAD DOG voice which is deep, dark and loud but punishment is NEVER to be encouraged. It confuses dogs and cripples their ability to learn.

Here is a video on changing English to “Doglish”.

The “Two Times Only Rule”

Now that your voice is toned and terrific, you need to use the ‘Two Times Only Rule. Simply put, when you want your dog to respond to you, expect is to respond to the first request.

If necessary drop to your second and last request BUT don’t ever get to the third request. 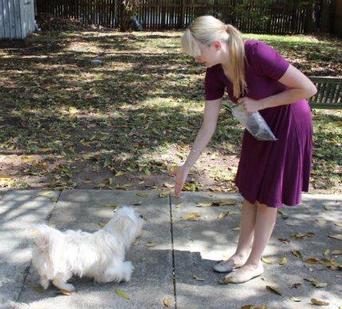 For instance, if you want your dog to come to you, issue the command COME, using the commanding voice. Wait five seconds to TEST your dog’s response.

What happens?  Either your dog comes to you – or it doesn’t. It’s simple because now you only have TWO roads to travel.

If it is coming, finish with a SIT and then praise it with the GOOD DOG voice. Then do a series of Sequential Rewards (see later).

If it is not coming walk serenely to your dog, hook its collar with a finger, command COME again, for the second and last time, and then lead the dog to you by walking backwards three to five steps and then gently make it SIT. Then use your GOOD DOG voice to reward the clever canine.

Thus, you have used the Two Command Rule to gently show your improper Pooch there is a limit to a non-response.

Using the Two Command Rule like this, the dog is gently forced to comply and you set a definite boundary to its non response.

To really tone up the grey matter now do a series of Sequential Rewards.

Having won the first COME and SIT, your dog may not be totally focuses on you.

So, fix it. Do a series of COME – SIT – GOOD DOG! sequences by just walking a short three to five steps after each sequence.

The Sequential Rewards also mean that your dog is being rewarded for a sequence of good behaviors rather than the old fashioned focus of punishing your dog for just one bad behavior.

The second video in the series focuses on this technique: 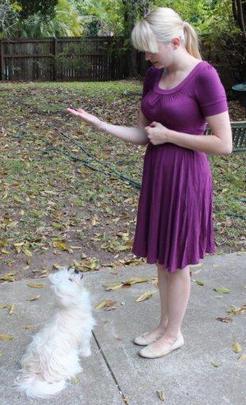 Using perfect timing is also essential to stop your dog doing something you don’t want it to do. Taking action immediately a behavior start brings the end of the behavior up to the beginning and the problem middle bit evaporates.

For example, as soon as your dog issues the first WOOF, immediately command your dog to be QUIET.  Don’t wait for the second, third or fourth woof as you will then be allowing the middle of the behavior to develop.

Now we can really tighten things up by ensuring consistency. If every occurrence of a behavior is corrected (correctly), the behavior will disappear. For instance, if your dog barks ten times per day, correct it every time and get ten out of ten.

However, some behaviors occur too frequently for every incidence to be corrected. In this case, Cone Down on the problem.

That means that you shouldn’t allow the behavior (such as barking) to occur when you can’t deal with it.

Alternatively, set up two sessions per day, say one in the morning and one in the evening,  when its suits you to deal with the behavior and when ALL occurrences will be corrected.

For barking, perhaps you should only allow your imperfect pooch near the front fence twice per day when you are with it to correct it and keep it inside with you when you are not wanting to deal with the behavior.

The Circle of  Rewards

Using barking as an example again, if you want your dog to COME and SIT instead of running at the fence and barking, why pick on it when you have the problem and you are likely to fail?  Instead, take your dog to the fence when there are no bark-inducing stimuli present and train it to respond. To do this, use the Circle of Rewards. 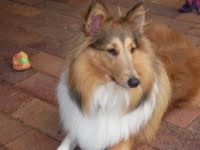 Firstly, throw a food treat towards the fence and command your dog to SEEK the food treat. As it is doing this, walk off a few paces. When it gobbles the food, command COME and then SIT. Your dog is very likely to respond because of the food. Then repeat the circle again – SEEK – COME – SIT. This is just another version of the Sequential rewards.

It should only take you five minutes to repeat this circle fifteen times in the morning. Repeat the sequence again in the evening. That makes thirty times a day you are practicing perfect behavior control of your previously wayward pooch.

NOW do that for seven days. Do your maths. That make 210 repetitions of a perfect routine. This is speed teaching

How many dog owners would EVER think about teaching their dogs to be perfect 210 times per week. NONE – except for you!!

Using the Circle of Rewards, you are picking on your dog at times when it is calm and concentrating and, therefore, when it is able to learn.

Trying to correct a behavior when the dog is immersed in the emotion of the behavior is picking on it when it is freaky and frantic and when it has very little ability to learn.

The Circle of Rewards is a valuable tool that can be applied to many problem behaviors including aggression, attention seeking, boisterousness and bossy behaviors.

The Circle of Rewards is also part of the Leave Routine – a routine I use regularly for problem behavior management.

So, getting good behavior from dogs involves using the correct voice, consistently and as soon as the behavior is about to begins. Couple this with the Circle of Rewards and your dog will soon be a Canine Einstein.

More information on the Leave Routine