How to trim a pet’s nails

Molly the Daschund hobbled into the surgery on three legs. While scampering after a ball and doing an Alfie-Langer-like sidestep, she had torn a claw from her toe and the remnant was still attached. After a quick anaesthetic, the useless claw was removed. Her claws were excessively long so while she was snoozing, we did a full manicure. She walked from the surgery on four legs and, in her case, the claw will likely grow back normally.

Split and damage claws are seen regularly in veterinary clinics and, like Molly, often it is due to the claws being too long and becoming damaged with exercise.

Even cats and even birds need their claws trimmed occasionally. With cats, claw trimming can be part of the therapy for those monstrous moggies that claw furniture (view the sister article below). Also, aged cats that are inactive often have very long claws that make it difficult for them to walk properly. A cat’s long claws can even become caught in the carpet.

Birds, especially Budgies, regularly develop very long claws when they are confined to a cage, especially when the perches in the cage are too narrow.

The very thought of trimming a pet’s claws can cause tremendous fear. Immediately the nail cutters are picked up, shaking, trembling, hyperventilation, panicking and even aggression can occur. Similar behaviours are also seen in the pet but there are solutions!

Firstly, regular exercise on hard ground will help as the ground acts like an emery board. For birds, ensure a range of perch widths is available in its cage and make sure the perches are not too narrow. Wrapping sand paper around one perch is a good idea but most birds will peck this to pieces in no time. 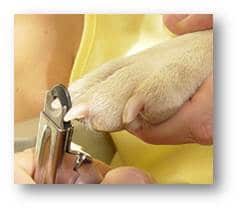 However, when a pet’s nails need to be trimmed, the right equipment is essential.

For dogs and cats, specialised trimmers are available from your pet shop and veterinarian. There are many styles, but the most common involves a spring-operated guillotine device. For young cats and birds, the human, pincher-like nail trimmers that are readily available are suitable.

The object of claw trimming is to trim the end of the nail without touching the quick growing through the centre.

This is easy with white or clear nails as the quick can be clearly seen but it is Russian Roulette with black nails, where trimming involves educated guess work. Trim the tip of the claw and look at the centre of the trimmed surface. The surface of the trimmed area will be dark grey to black if more can be trimmed but becomes a lighter grey and then white as you near the quick. Any suggestion of pink means you should stop. If the claw bleeds, you have gone too far as your pet will confirm!

Stopping the bleeding of a trimmed claw can be difficult but they all stop eventually. Try smearing some Vaseline on the claw tip or try applying gentle pressure with a tissue or cotton ball. Kept the pet still until the bleeding stops.

If you have a puppy, kitten or even a young bird, train it to accept claw trims at an early age by allowing it to sniff and explore the trimmer long before the claws are trimmed.

When adult animals terrified or aggressive, a more involved process is used.

Wriggles, a handsome Chihuahua is a prime example. He suffered a panic disorder when his owner attempted to trim his nails that was so severe that he would reject his owner’s affection and hide from her for at least two weeks afterwards.

His claws were just too long to be ignored so he was packed of to the local vet for a gentle anaesthetic so a full trim could be conducted. Wriggles woke up none the wiser except he found that walking was now much more comfortable.

However, that was only part of the solution.

For behaviour therapy, I didn’t want Wriggles associating the toe nail trim terror with his owner, I banned her from the job for a while. Instead I prescribed a gentle anti-anxiety medication so that Wriggles would allow his vet to trim his nails without the ‘terror of the trim’ causing problems.

Also, I taught Wriggles’ owner a simple game called the Circle fo Rewards that she could play to desensitise him to the terror of the trim.

Using food treats, Wriggles was rewarded if he remained still for a few seconds while his upper leg was scratched with a finger.

He loved food so it took just ten minutes for him to learn to remain still. Next we introduced the cutters which were rubbed against leg for a few seconds while he remained still.

The joy of food was fair and just compensation.

Eventually the cutter made it to his claws, then his paw was raised, then a single claw was trimmed without a hint of panic.

The champagne flowed! Now we only had seventeen claws to go!

A process like this is usually effective but it is not quick and the solution for Wriggles took more than a month of daily practice. Patience is a virtue!