Spring is nearly upon us and summer is just a sniff away. The days are getting longer and the animal kingdom is waking to a new ‘season of sensuality’. It’s not only the flowers that blossom and send out their wonderful perfumes at this time of year but many species of animals also send out their own seasonal scents in spring. The most important of these scents are pheromones. 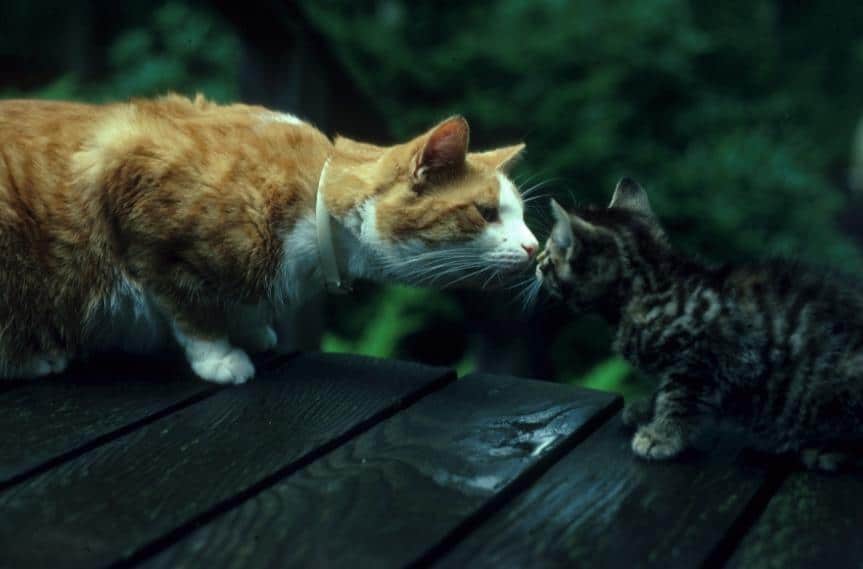 Pheromones are extremely widespread in the animal kingdom. They are like hormones in some aspects. However, while hormones stay within the body of the animal that produces them and thus affect only that animal’s behaviour, pheromones are released from one animal and, when detected by another animal of the same species, have a significant effect on the behaviour of that receiving animal.

Pheromones come in many forms. Some relate to sexual identification, some help animals to mark territory, some serve as warnings to other animals and some relate to familiarisation and attachment.

In dogs, the dog appeasing pheromone is one that has been studied extensively. This pheromone is normally produced in bitches three to five days after they have whelped. It is secreted by the skin around the bitch’s mammary glands and serves to create attachment of the newborn puppies to the dam.  A similar pheromone is also released by adult dogs from the skin around their ears. When released by pack leaders, this pheromone has a similar role, but on a wider basis, to the pheromone produced by a dam – it creates attachment of young animals to the leaders and makes the pack cohesive.

While that may sound complicated, the good news is that cat, and more recently, dog pheromones are now produced synthetically and placed in bottles to help pet owners better manage their pet’s behaviour. This is a very new and exciting form of science. With dogs the dog appeasing pheromone (Adaptil) is used to aid the treatment of anxiety disorders and fears. For cats, the pheromone Feliway is readily available and is used to stop cats spraying, as well as in assisting cats to become comfortable when moving into a new residence.

The dog appeasing pheromone aids in the treatment of fears and anxieties in dogs and can be part of the therapy for:

For instance, to determine the effects of the dog appeasing pheromone, a study was conducted on 26 dogs where 20 were destructive, 18 were vocalising excessively and 12 were house-soiling. After 28 days of pheromone use, the behaviour of approximately 75% of the dogs had either improved or resolved.

Adaptil is available in three forms – a plug in diffuser, a collar and as a quick-acting, as-you-need-it form that is currently available only through consultation with Dr Cam.

The synthetically manufactured version of this pheromone (Feliway) helps when moving house with cats, or when new cats are introduced to a cat household. The pheromone also helps to reduce spraying behaviour and to calm aggressive cats when many cats are present in the same household.

The pheromones used to achieve such changes in behaviour are synthetic versions of a cat’s facial pheromones. These are the same scents that a cat rubs on its owner when ‘bunting’ in greeting.

For cats that spray urine inside their owner’s homes, cleaning the soiled area and then marking the area with the synthetic pheromone helps to solve the urine spraying behaviour. The calming function of the facial pheromones has a preventative effect on urine marking,

In addition, these facial pheromones help to settle cats into new homes, promoting exploration and calmness and establishment of normal feeding behaviour more rapidly than when the cat is placed in a new home with no pheromones.

Feliway is available in two forms – a plug in diffuser and a spray.