Annie from Carina writes about Peanut an 11 month-old domestic shorthair cat. Peanut is a male, neutered rescue cat that Annie adopted from a shelter at 6 months of age.

Peanut has recently lost his appetite in association with a house move and with Annie being away for a while and she is concerned about that.

He will wake Annie in the early hours, typically 3am – 4am. At that time he is active and cheerfully playful, chewing power cords, jumping over furniture and the kitchen counter, scattering and wrecking valuables in his wake and generally being an early morning nuisance creating more devastation that a super-charged hurricane on a bad hair day.

He has also started humping some of his plush toys which Annie finds unusual considering he is neutered.

The three identified issues with Peanut are:-

It’s unlikely his reduced appetite relates to the other two behavioural issues albeit the association with Annie’s move may indicate he is overly anxious and ‘worried’ about changes to his routine and territory.

Being a rescued cat, most refuges are very good at ensuring the optimum health of their adoptees but if he was a hunter before Annie took over his care, there’s a chance he may have a specific tapeworm called a spirometra which is a little more difficult to eliminate than normal tapeworms.

There are many other causes of a reduced appetite and the scope of that is beyond this Pet Fix but a visit to the veterinarian is warranted. Because Peanut uses a litter tray, taking a sample of his faeces for examination will speed the process so that worms and other parasites can be confirmed or denied at that time. A full examination by Annie’s vet will also determine any other medical malady causing Peanut’s reduced appetite.

Nocturnal attention seeking is a common behaviour with cats. Cats are nocturnal predators and humans are not! We prefer to sleep at night but cats prefer to boogie at night.

Being the breeding season at present (it extends from spring through most of summer), cats are more active after dark right now. Although Peanut is desexed, the romantic misdemeanours of the few non-desexed cats in Annie’s neighbourhood are likely to cause Peanut to wonder ‘what’s that all about’. Thus the roaming activity of local cats, with their yowling, fighting and urine-spraying, may be stimulating Peanut to be active at night.

Annie may not see these cats but Peanut will be well-aware of their presence due to sounds they make and the smells they leave behind as they roam.

Installing a Feliway Diffuser may make Peanut less worried about territorial challenges from other cats and thus make him more content, creating a restful state at night. Sometimes a few drops of a homeopathic preparation specifically designed for pets can be effective.

Annie could implement a simple trilogy of tired-making tricks just before bedtime to create a soporific effect:-

His humping behaviour is not a sex-based behaviour. It’s a common-enough behaviour of desexed cats and mostly indicates boredom as a consequence of being house-confined. Enriching his lifestyle with game play routines are likely to help with that, along with the removal of items targeted by his wayward ways. That should get him over the hump of the problem. 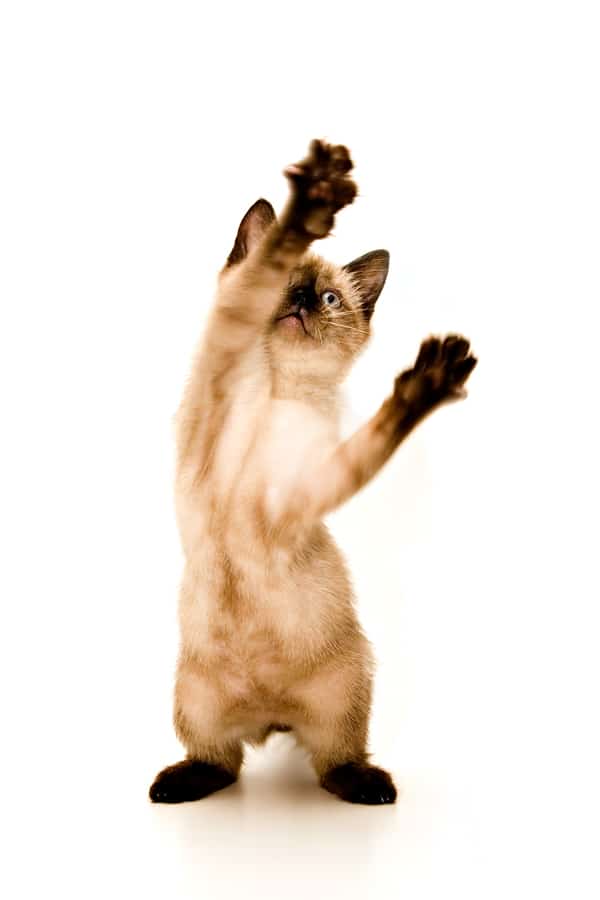