Why do Dogs Escape (Continued)

Anxiety and panic disorder cause escaping

However, there is another group of dogs that escape for very different reasons. These dogs are not happy, healthy dogs. They are dogs with psychological disorders where their escape behaviour is almost caused by anxiety disorder, panic disorders and compulsive disorders.

Some of these dogs often have a backyard phobia, a panic disorder or a separation anxiety.

For them, the escape behaviour is not a casual thing.

It is a driven need to escape at all costs.

These dogs will injure themselves in their attempts to escape.

I have seen such dogs sit on the active wire of an electric fence receiving continual burns while they dig under the boundary fence to escape. I know of dogs that repeatedly jump at fences as high as two and a half metres until they work their way over them. These dogs will chew at fence palings and will even bend the bars of metal fences in their efforts to escape. In so doing, they will injure their teeth and gums, leaving behind only the gruesome legacy of frantic claw marks and blood stains to show what happened.

Backyard phobias and panic disorders are often caused by an unpleasant event that the dog associates with the garden. A simple event such as the branch of a tree falling into the yard is enough to scare some dogs. Others become fearful in their yards after being confronted by a burglar or by another dog that has jumped the fence. Some are terribly scared of common wildlife such as snakes (especially carpet pythons) and by possums or lizards.

Then there are the dogs with noise fears. Dogs will escape when they are scared by thunderstorms, firecrackers, cap guns, hot air balloons, the backfire of a car engine and the sound of whips. One dog I saw would even escape when it heard the hiccuping of the family’s eight month old baby!

Dogs with a separation anxiety show much the same problem. While they are not fearful in their backyard, they do have a serious anxiety disorder that stems from the fact that they adore their owners and cannot cope when the owners are away at work.

Separation anxieties are usually progressive. In the early stages, a dog may be a little destructive in the back yard and may bark more than usual while the owners are at work. However, this can progress and one of the outcomes is repetitive escape behaviour.

What are the Solutions for Escaping Dogs?

A secure fence is the first step and the rule, the ‘bigger the better’, is a reasonable one.

A chain mesh and pipe fence is the standard type of dog fence. A pipe at the bottom of the fence is essential to reduce the chance of your dog digging under the fence.

Watch for undulations in the ground which produce hollows where your dog may dig out.

A picket fence also makes a good dog enclosure but there is a significant danger with them. Dogs which jump will often get their paws lodged between the pickets at the top of the fence with fatal consequences. You can easily prevent this danger by covering the gap between each picket at the top with a horizontal paling, running the entire length of the fence.

A solid wooden or brick fence. Ensure any horizontal supporting beams of a wooden fence are on the opposite sides of the fence to where the dog is housed. Many dogs are able to use the horizontal beams as a ladder to help them get over the fence.

Colourbond or metal fences are very good but again watch for undulations of the ground.

Electronic fences (not electric fences) can work well, especially on acreage properties but they are a specialised form of fencing which needs to be installed by a qualified person, and certainly not self-installed.

For those escape artists that continue to jump or climb the fence, the addition of a ‘lean-to’ section on top of the fence, angled at forty-five degrees inwards, is usually effective. Be sure the construction is such that your dog cannot get caught at the top of the fence. 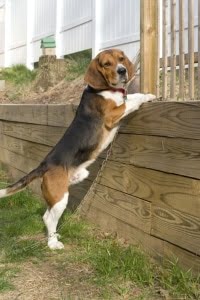 For those dogs with anxiety or panic disorders, medication is usually essential to reduce the anxiety and to keep the dog safe. While on the medication, the dog needs to experience a ‘back yard enrichment’ program that will teach it that the backyard is, again, a fun place to be in. Then the medication can, often, be removed.