Travelling with Pets in Cars

Dogs misbehaving in the car can drive you around the bend!

Many dogs turn into manic mutts when travelling in the car. Such wayward woofers bark and whine and pant and pace and scream and howl for the whole car trip with the result that the dog owners emerge from the car looking like they have spent hours in a giant-sized tumble dryer.

This is not as difficult to cure as you may think. 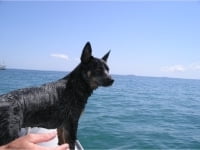 1.  Is Your Dog Fearful or Anxious in the Car?

One group of dogs is fearful of car travel because they have travel sickness. This is caused by continual rocking movement of the vehicle and the rapid passing of outside scenery.

This is similar to travel sickness experienced by people and many dogs thus affected will be nauseous and will vomit. This is not a pleasant experience for man or dog!

For such dogs, chewing often has an anti-vomiting effect. Try giving the dogs a pig’s ear or Greenieto chew while you are travelling. This will distract the dog, make if happier about car travel and has at least some stomach-settling effect.

In humans and even in horses (Bergero, D. 2004) the use of ginger is known to be useful to prevent travel sickness. This seems not to have been well researched in dogs but tablets available from various human health outlets could be considered.

2.  Your Dog may be Over-excited from the Visual Stimuli

Perhaps your dog is overexcited by all the commotion that car travel involves.

This is because of:-

Do you feel your dog is too territorial in the car and is being aggressive? In realty, territorial aggression is just a form of anxiety because some dogs feall threatened by people and other dogs seen outside the car.

For some dogs, the car is an extension of their home range.

When they see other dogs and or people passing, the dogs become territorial and will bark and growl, often quite ferociously.

While all dogs can become sensitive to car travel, ‘visually-coded’ working dogs, especially border collies, cattle dogs and kelpies are most commonly affected. In addition, any dog of the terrier type is also likely to participate.

Dogs of this type are very reactive to movement. That is why such dogs are useful for herding of cattle or sheep because the movement of the herd stimulates the dogs’ instincts. When in a car, they cannot fail to become over-stimulated by the continual movement of objects that flick by quicker than a supercharged sheep!

Contents of the next page (membership required)

The following Magic Methods Include :